BALLERINA OF THE MONTH February 2019

A sparrow once was really angry on the Sun because he shined too brightly, and hence, she could not take her young ones out. The Sun was annoyed and did not shine the next day. There was darkness all around and nobody could get out of their houses at all. The sparrow realized her mistake said sorry to the sun and all was well once he came back

Moral: Be polite and don’t get angry on people for doing their jobs!

You must be wondering, why are we narrating this Panchatantra styled fable today? This is a short story written by NyassaSanghvi, a talented 9-year- old and already from the likes of this story, we infer, is really insightful for her age.

We’re excited to announce that Nyassa has been crowned as the Ballerina of the Month for February 2019.

Nyassa is the younger daughter of Samta, an accessories designer, and Rajeev, a property developer. She has an elder sister, Jiyana, a young ballerina at LDAB, who is a former Ballerina of the month. Clearly, talent runs deep in the family.

Nyassa is a 4th Grader at St. Mary’s in Pune. Her mother Samta describes her as a , mischievous brat who doesn’t really care about the rules and has a very moody personality. I wonder how this volatile demeanor can be ideally suitable for a dance form such as ballet which demands discipline and dedication of the highest standards from its students. On quizzing further about these aspects, Samta confesses,

“The reason I encouraged Nyassa to take up ballet was loved it at . That’s how she got started with it. Nyassa really had very little inclination towards it and she was almost at the verge of giving it up. But I remember, Neha had a one-on-one pep talk with her that had a lasting impact on her and after that day, things turned around and how!”

“After our talk, there was a marked difference in Nyassa’s performance in class. Here was this girl who would jump around with abandon and pay very little attention. And then overnight, she transformed into someone who always has her head held high with her body in the perfect posture when we’re practicing. Now, she will religiously move around in class only on her tippy toes just like an ideal student of ballet.”

Nyassa transformation has borne her rich dividends. She passed her first CTSD examination in November last year with flying .

Jiyana and Nyassa share a special sisterly bond. Jiyana has a motherly attitude towards her. Nyassa, on the other hand, will surely end up on Santa’s naughty list as she tries to irritate Jiyana in creative ways. However, deep down they both love each other immensely. They performed together at LDAB’s Once upon a time concert in December 2017.

Nyassa also happens to share a beautiful relationship with animals. She emits an aura that makes her particularly affable towards animals. This was an observation made by a monk in when the were all on vacation there. Nyassa petted a wild deer, which wagged her tail in glee and licked her cheek affectionately.

No wonder, Nyassa owns a pet too. She can spend hours at a stretch talking and playing with “Waffle”, a very creatively named guinea pig whom she adores.

I conclude by talking to about her parenting philosophies, who has some solid advice,

“Let the child just be. Every star shines. They will excel at their own time, provided we as parents let them. I am very proud of the fact daughters are comfortable about sharing everything with me without any filters. I’ll be content if both my daughters turn out to be good human beings.” 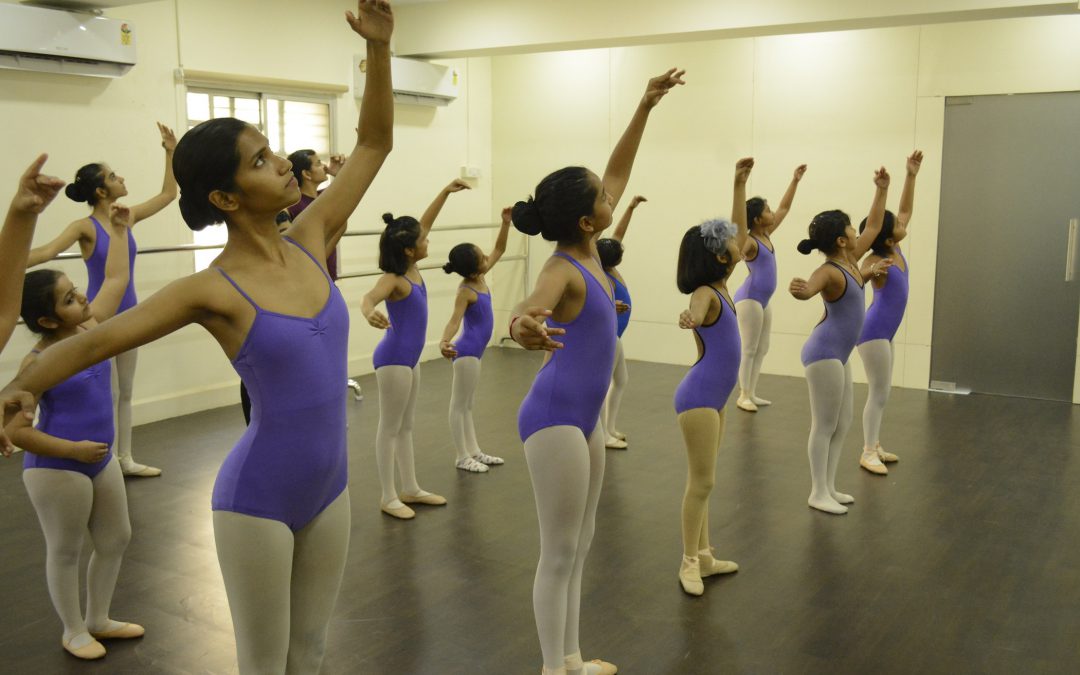 Exams are significant events in every student’s life. Historically, students more often than not end up associating exams with “stress”. That may be true when it comes to conventional tests in school and college, but we at LDAB take pride in the difference we make in the lives of our young ballerinas by not causing an iota of stress throughout the exam process.

Over 80 students from shall be appearing for their Pre-Ballet, Primary, Grade 1 and Grade 2 examinations place on November 28 and 29, 2018. The Examinations are being conducted under the programme designed by the esteemed Commonwealth Society of Teachers of Dancing (CSTD), headquartered in Australia. We at LDAB are proud to announce that this year the examinations shall be graded by learned instructors flying in from CSTD headquarters. It’s an for us to host these renowned personalities in Pune and we believe this will be an equally exciting and enriching experience for our ballerinas as well.

As part of the abovementioned approach to exams at LDAB, we’ve collated a list of things we expect from our bright exam-takers, which if followed to the T, will ensure that it’s a complete joyride from the start to the end. We urge parents and students to carefully go through the entire article below.

Our classes for November shall be majorly geared towards getting students exam-ready. Neha Suhjani, our Creative Director, shall be giving out important tips and tricks pertaining to the syllabus, the important exercises . needed to ace the tests. We emphasize that attending all the sessions this month is the best way to prep.

The students shall be taking their exams in groups of 2-3. The Exams are spread over 2 days: 28th and 29th of November, 2018. The Time-Table has been already shared with the students.

The students must arrive at the dressed in their complete uniform at least 20 minutes prior to their scheduled exam time. Changing into the uniforms after arriving at the shall not be allowed.

We expect the students to be presentable. This is an important factor in the grades awarded.

The examiner shall ring a bell, which will mean that the next batch of students should enter the exam room. The ballerinas should run into the studio smartly with their heads held high. They should greet the examiner warmly. A “Good Morning/Afternoon/Evening” with a bright smile shall suffice. Then the students should proceed to perform the exercises as required by the examiner. While performing, the student should respect the examiner’s space not encroach upon it.

The students should perform in the chronological order of their roll-numbers only.

After the exam concludes, the student should do her curtsy bow as a gesture of respect to the examiners, then proceed to thank the of the music, and then run out smartly from the studio. Demonstrating confidence throughout the interaction is the key.

In the Grade 2 examinations, the examiner shall test the ballerina’s knowledge by setting an exercise on the spot, which is then required to be performed by the ballerina. In case, the student is confused in regards to what is expected from her there, we encourage her to get it clarified from the examiner, so as to avoid making a mistake which could be potentially avoided.

Exams at LDAB are meant to be enjoyed and it’s important that the student has fun throughout the whole process. The abovementioned pointers will ensure that the student is well-prepared and presentable on exam day. This shall take care of any anxiety issues one might face before the exams. We want this entire process to be a comfortable one.

And the most important rule: Always smile. No serious faces allowed. There’s a provision for extra marks for a beautiful smile!